AMVETS NSF History
For more than half a century.
We have served veterans across America.
View Our FAQ

The AMVETS National Service Foundation was created in 1948, with the goal of assisting our returning veterans from World War II by aiding in their readjustment back into civilian life. This goal has continued to this date.

As in World War II, Korea and Vietnam, new generations of veterans with unique physical and mental disabilities returned to an antiquated benefits and disability system overloaded with claims. It is the same for our veterans of Operation Enduring Freedom (OEF) and Operation Iraqi Freedom (OIF). Our National Guard and Reserve Forces have been utilized and called to active duty in far greater numbers than ever before. Today female soldiers, seamen and airmen, are serving in or near combat zones in ever increasing numbers, thereby creating unique family separation problems not encountered in other wars and conflicts. Financial, family and emotional problems as well as Traumatic Brain Injuries (TBIs) have surfaced in such large numbers that the local National Guard and Reserve units were not prepared to deal with them in the early stages of the war.

AMVETS National Service Foundation again responded to this unique challenge. AMVETS signed a Memorandum of Understanding (MOU), with the National Guard to provide direct support to our deploying and returning personnel and their families, providing this assistance in their local armories and home units. To facilitate this we assigned a full-time Guard Liaison Officer to the Family Support Staff at the National Guard Bureau and Walter Reed Army Medical Center to assist in the Physical Evaluation Boards (PEBs) and Department of Veterans Affairs claims processing. These additional commitments have strengthened efforts to assist returning veterans at the time of separation, retirement or release from active federal service through the Transition Assistance Program (TAP).

AMVETS National Service Foundation has continued its important work as we continue to witness further erosion in veterans’ services. To turn this tide in favor of our veterans, AMVETS National Service Officers (NSOs) work heroically on their behalf. Today, using state-of-the-art computer technology, our NSOs are even more effective as they work directly “online” with the Department of Veterans Affairs.

Our NSOs labor diligently, even on weekends, helping the members of the National Guard and Reserves cut through the maze of red tape and logjams to obtain all VA benefits due to them under the current law for service-related conditions. Between September 1, 2009 and August 31, 2010, our NSOs have presented 233 briefings to 24,700 National Guard/Reserve members, veterans or surviving family members and taken 367 claims at the conclusion of the briefing session. All this activity has a value $74,628 for the services provided to the Guard and Reserves.

For more than half a century the AMVETS National Service Foundation volunteers have served veterans in VA Medical Centers across America. Their extraordinary efforts have been the only thing standing between effective patient care and many hospitals ceasing to function.

AMVETS National Service Foundation is continuing its commitment to freedom made by our veterans, past and present. We would like to thank you for your help and support. Without you, our veterans would face a far more difficult and uncertain future. 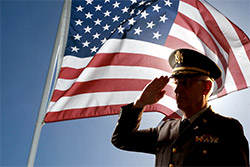